The chance encounter that is saving Nicky’s life 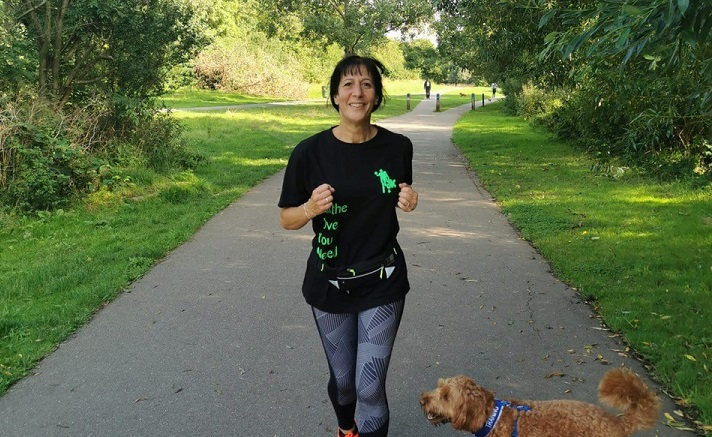 Ellern Mede colleagues are inspired by Ward Clerk, Nicky Marks, who has found positivity and a fighting spirit to beat cancer AND raise money for a charity close to her heart. Her lovely close family, friends and colleagues have joined her in these endeavours and together have already raised more than £8,000 for a children’s hospital charity in Israel.

Friends and family are joining her in her 5 kilometres a day running challenge which is raising this money through a Just Giving page here.

The story has resonated with thousands of people, as it has been picked up on national press, radio with the Trisha Goddard Programme, and numerous online and print news articles. Please click the link and listen to Nicky’s interview, which is now on Ellern Mede’s own YouTube channel.

So where did this all begin? Well Nicky, who has already recovered from cancer once, was not due for a few years yet for another check-up. But she happened to recognise her oncologist while out running in her neighbourhood, chatted to him, and this doctor requested Nicky come to his surgery for an early screening. She did and after many tests, they were shocked to discover a Stage two cancerous tumour which will require both surgery and chemotherapy.

Where most people would have gone into shock and sadness, Nicky’s positive energy kicked in. She decided to turn this unhappy circumstance into one of positive hope and blessing. She determined: “I will run 5 kilometres every day until I beat this, and I will raise money for Alyn Children’s Hospital, a charity that is close to our family’s heart.”

And so, she did. And the world responded. She received outpourings of support on social media and even calls at work from people inspired by her story.

“People are really getting involved and the donations that I’ve got are from friends of friends of friends,” she said. “I’ve obviously touched a nerve somewhere. It’s just amazing how inspiring it’s been for people.” She hopes she can inspire others to remain vigilant and stay positive if they do get a diagnosis.

Nicky said: “The amazing support and love I have been receiving from everyone has definitely kept me distracted from the negatives and focused on the positives.”

Nicky’s family is closely linked with Ellern Mede. Husband, Howard Marks, is also an employee; her son Daniel worked at Ellern Mede throughout the pandemic and is now back to his career as a musician on a cruise ship. He, and many other family and friends have joined her 5k Charity Challenge. Daniel is running 5ks a day on a treadmill on the ship. Josh, her 16-year-old son who donated Bar Mitzvah money to Alyn, is also doing the challenge, as is her cousin, who is swimming 2ks a day. Her daughter in the USA, who is a hairdresser, is donating all her tips to the cause.

Peter Curtis, Ellern Mede managing director said: “Nicky is a tremendous person to work with. Her health means a great deal to us at Ellern Mede and clearly also to a lot of people around the world.”

Read what the media have written about Nicky

BACK TO BLOG READ NEXT 8.3% reduction in mental health stigma ...