The power of small talk 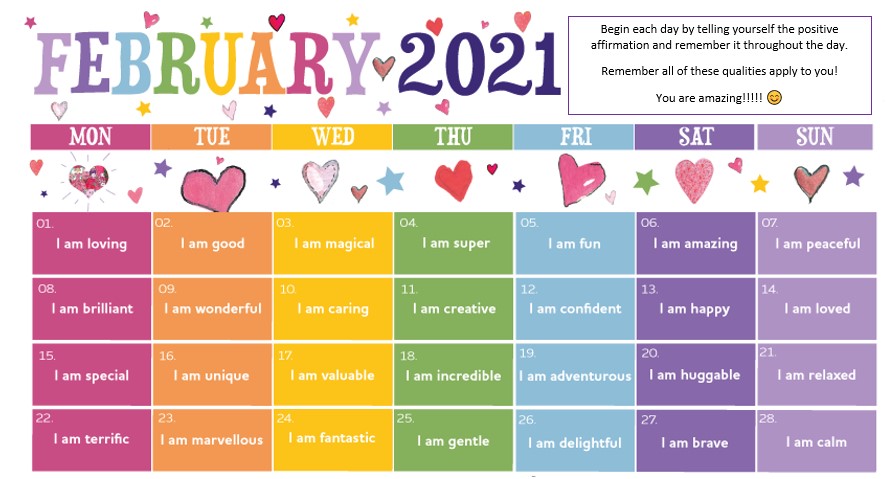 This Children’s Mental Health week, patients at Ellern Mede will share their thoughts with one another and staff about whether talking about their thoughts, behaviours, feelings and mental health helps them. They will make posters and work with expert staff on channelling those thoughts in a positive way.

We do this all year round of course because at Ellern Mede, challenging the eating disorder’s power is what we do. It is special this week of course because along with national campaigns, we are raising national awareness of both children’s mental health (Children’s Mental Health Week} and on 4 February, Time to Talk Day – an initiative backed by Rethink, MIND and Time to Change.

For example, our team at Ellern Mede Ridgeway are sharing a ‘Positive Affirmation Calendar’ illustrated above, which encourages young people in our hospitals to start the day with recognition of positive thoughts of themselves.

Aside from receiving psychological interventions and psychiatric  monitoring as part of their care with Ellern Mede, patients also spend time at Ellern Mede School maintaining their educational achievements, as well as extra-curricular time with Occupational Therapists, Activity Co-ordinators and Therapeutic Support Workers where their ‘talking’ can take the form of art, creative work, making posters and sharing games in groups.

Other ways we hear about how ‘talking’ really helps people, come from well known public figures, who show that when they come out and admit they have had an eating disorder or any other form of mental illness, they don’t need to be ashamed. It is as much part of being human as is breaking a leg or having an allergy. But it is a lot more complicated, and a problem shared is a problem halved.

Together we can end mental health stigma. Don’t be ashamed to admit that you need help. Together, we are infinitely stronger than alone.

BACK TO BLOG READ NEXT How to find reliable nutrition informati ...