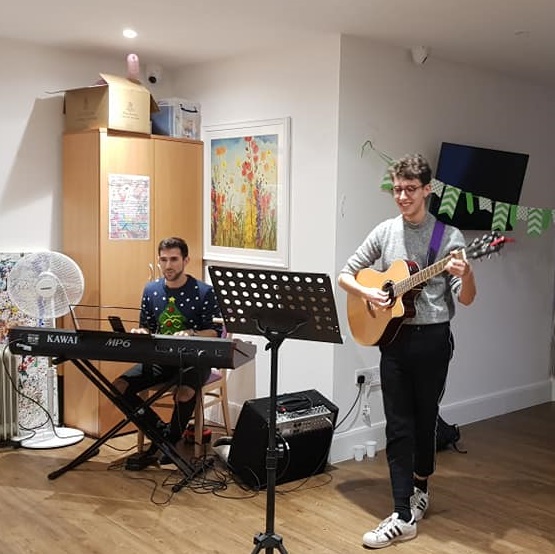 Music makes the heart lighter, especially at Christmas so our patients were delighted when they had a sing-along performance from local musicians Dan and Joel with a selection of Christmas songs in our ‘Rainbow Lounge’ at Barnet. Around 40 of us gathered to tap to the beat.

One patient wrote after the event:

Thank you so much for coming and playing for us. It was amazing and I know that we all appreciated it. Thank you for coming as our days are really long and boring. They drag and so it was really nice to have something to do. I just wanted to say a massive thank you for coming in and taking the time to do it.

So let’s tell you a little about these young men, who are relatives of a staff member at Ellern Mede Barnet.

Joel has always had a passion for music. Starting out with the piano and moving swiftly on to the drums and guitar.

His love for music continued throughout his teenage years and especially at Oxford University, where, as well as studying Maths, Joel travelled the world with “Out of the Blue” the University’s unique acapella group.

It was during his time in Oxford that Joel met Jack and together they reached the live finals of the X Factor 2017 under the mentorship of Simon Cowell.

Joel said, after playing at Ellern Mede that “it was honestly a real highlight of my whole year and so lovely to celebrate with lots of lovely people”..

Dan started playing piano at the age of 3. He bought a drumkit at the age 9 and attended the Guildhall School of Music studying percussion. He went on to win their prestigious Lutine Prize. Dan also starred in 2 West End productions, Beauty and the Beast (alongside John Barrowman!) and Chitty Chitty Bang Bang at the Palladium. Daniel composed his own piece of music which he played at St James’ Palace in front of Royalty. He studied Creative Music Technology at Surrey University and went on to do a teaching degree.After teaching in both primary and secondary schools, Dan decided to join Princess Cruises and has been travelling the world with his band. He hopes to go back on the cruise ships next year as a soloist.

BACK TO BLOG READ NEXT Dangers of over exercising ...