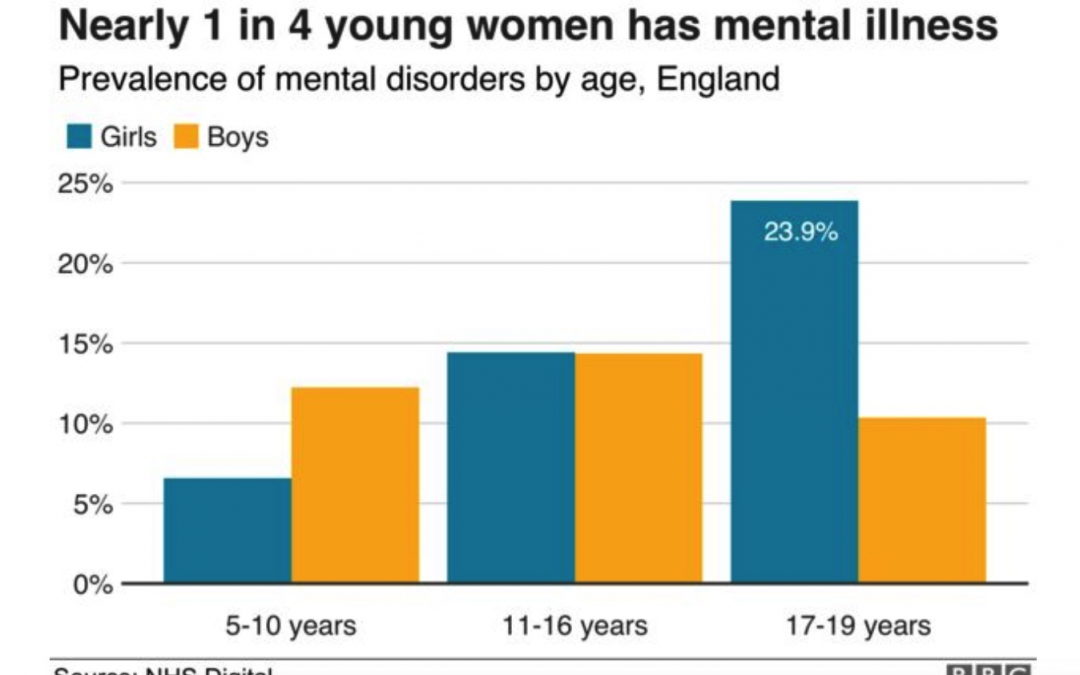 Left untreated, mental ill health robs thousands of young people of their teenage years, a recent study of 9,000 people by NHS Digital has found. The results show a  marked rise since the previous study done 13 years ago.

Now 24% of girls between 17 and 19 report a diagnosable mental health condition – about twice the incidence among males of the same age. That’s 1 in 4. The number of children aged 5 to 15 reporting a diagnosable condition has risen from 1 in 10 in 2005 to 1 in 9.

Commenting on the statistics, Dr Bernadka Dubicka, of the Royal College of Psychiatrists, said the numbers of young women with problems was “alarming”. “We can only speculate. We still do not fully understand this – all we know is that we see more girls in our clinics.

We have to make sure services are available for them.”

Anne Longfield, Children’s Commissioner for England has recently reported that more specialist community services for children are needed to reduce waiting times and the number of children being rejected for treatment. She pointed out that half of young people in the highest prevalence group – late teens, self-harm or attempt suicide.

Emma Blezard, 18, says her mental health problems have robbed her of her teenage years. She started experiencing difficulties when she was 13, suffering from anxiety and panic attacks before developing an eating disorder, yet it was a whole year before she revealed her problems. “I’ve missed so much of my life because of this illness – I’ve lost friends, I’ve missed birthday, holidays. I wish I could do things over.” See BBC Youtube news film about Emma and read the source article.

Ellern Mede, aware of the lack of service in many cases, expanded the number of young people we can treat during 2016 and 2017 and we continue to do so. Particularly at the late teen transition period including being able to provide for people as they turn 18 – a critical age where for many, the difference in available service makes their remaining in treatment and sustaining recovery impossible. Since introducing our ward for 18 plus in North London, we have been fully occupied. Now we are expanding geographically as well and hope to announce a new hospital in the new year.

BACK TO BLOG READ NEXT Treasure your Dreams ...