CAMHS to AMHS – a solution 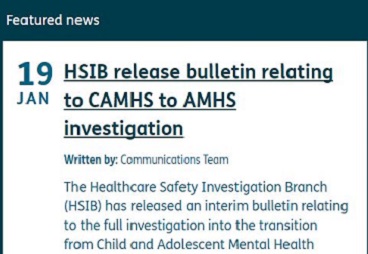 Four patients who entered Ellern Mede’s eating disorder service as inpatients under the age of 18 have successfully transitioned into post 18 care within the same hospital environment and keeping the same clinicians.

Reported in the Health Services Journal on 19 January, the Healthcare Safety Investigation Branch (HSIB)  published a bulletin. Among its findings as reported in HSJ is:

“Transitioning from CAMHS to AMHS is complex. Care provided by the two services often have very different thresholds for access. Some young adults may not be ready to transition to AMHS at 18 and benefit from additional short term support which may negate the need for AMHS.

“For those requiring longer term involvement with mental health services, the experience of AMHS can be very different from CAMHS, leaving patients vulnerable to a deterioration in their mental health or withdrawing from the services available to them.”

The big difference in Ellern Mede’s service is its focus solely on eating disorders as a primary diagnosis with no other primary conditions being treated at the same hospital. This has led to a leading evidence-based eating disorder therapeutic approach designed to suit each patient’s need.

18-year-old ‘Beth’ said: “A year ago, as my 18th birthday approached and I was in hospital at Ellern Mede I did begin to really wonder where I would be going. Then halfway through the year Ellern Mede opened their adult ward. The fact that I was able to move within the service, staying around the same people I’m used to has made the transition very much easier. It’s alleviated the pressure around the inevitable changes that are coming my way as I prepare for my next step. I’m hoping to move on to independent living soon.”

Peter Curtis, managing director, said: “Although it’s a small adult ward, it means a lot to the patients to whom we have been able to offer continuity and consistency of care in staying within the same building and with the same clinical team.”