A deadly treatment delay we can change 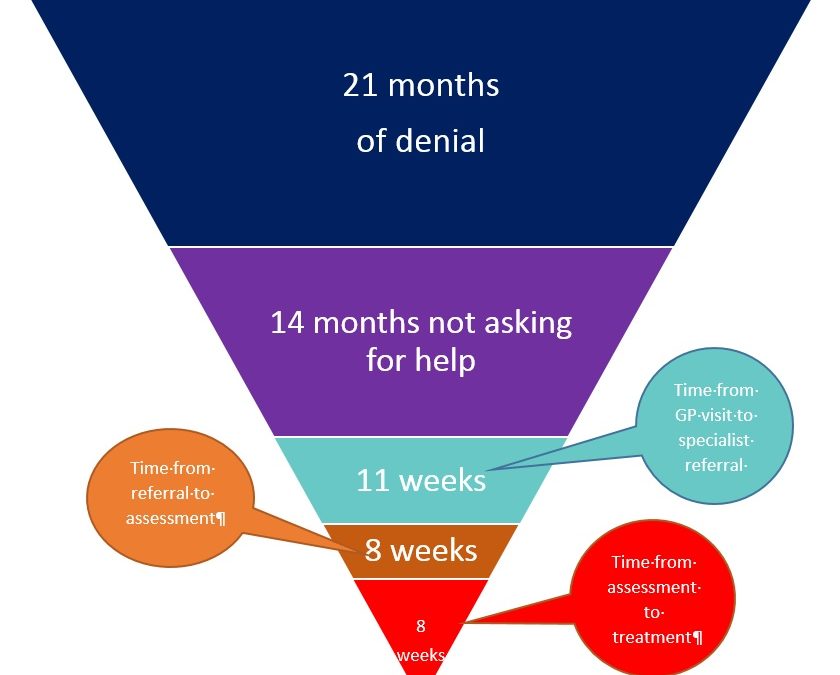 Of all the very important messages we read in the B-eat research into eating disorders announced in parliament on 15 November 2017, it is that the largest part of treatment delay lies between the appearance of symptoms and people realising they do have an eating disorder. Diagnosis is the first barrier to cross. It is something we all have the power to affect – the person with symptoms, the family, friends, teachers or colleagues who suspect something is wrong, the doctors who consider the case. The research suggests we are missing the signs. We all need to wake up and recognise that most duplicitous condition we call an eating disorder.

This is very significant research1 conducted using data from thousands of people, inpatient units and NHS England spending data. Here is just a part of what it found:

That means on average, from onset of eating disorder symptoms to start of treatment it is a deadly delay of 176 weeks – over three years. Well after the window of opportunity when treatment has the most chance of success. People treated within three years are more likely to recover. All organisations involved in eating disorder treatment, help or information will work towards much needed change.

So what changes might turn these delays into opportunities to improve this situation?

Ellern Mede representatives attended the launch in Parliament of this research. It was very encouraging to see that Government allocated high-level attention to this including an address by Jeremy Hunt, Secretary of State for Health as well as the announcement of the research by MP, Luciana Berger, Labour MP for Liverpool Wavertree.

1 Read more about the research methodology: B-eat’s first online survey in early 2017 was accessed by 3,158 individuals. B-eat analysed the data from 1,478 respondents from England referred to treatment over a ten year period between 2007 and 2017. A second online survey in September 2017 was with carers of those with an eating disorder. This was accessed by 1,645 people. In-depth interviews were also held. This was complemented by information gathered from Freedom of Information requests to inpatient units and a study of NHS England expenditure.

To view more about the research see B-eat’s website.

BACK TO BLOG READ NEXT ‘OFSTED: ELLERN MEDE OUTSTANDING IN AL ...